Unique in its Continuity

3.Written in different places:  Moses in the wilderness, Jeremiah in a dungeon, Daniel on a hillside and palace, Paul inside prison walls, Luke while traveling, John exiled on the isle of Patmos.

10.  In spite of diversity, The Bible presents a single unfolding story:  God’s redemption of humanity.

“The uniqueness of the Bible as shown does not prove that it is inspired.  It does, however, challenge any person sincerely seeking truth to consider seriously the unique quality in terms of its continuity.”~ Josh McDowell, p. 7.

Unique in its Circulation

The number of Bibles sold reaches into the billions.

“According to the United Bible Societies’ 1998 Scripture Distribution Report, in that year alone member organizations were responsible for distributing 20.8 million complete Bibles and another 20.1 million testaments.  When portions of Scripture (i.e., complete books of the Bible) and selections (short extracts on particular themes) are also included, the total distribution of copies of the Bible or portions thereof in 1998 reaches a staggering 585 million-and these numbers only include Bibles distributed by the United Bible Societies” (p. 8).

“If you lines up all the people who received Bibles or Scripture selections last year, and handed a Bible to one of them every five seconds, it would take more than ninety-two years to do what just the United Bible Societies accomplished last year alone.” 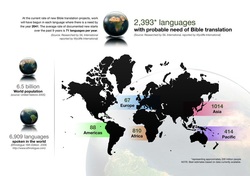 There are over 6,900 languages in the world today, almost 2,400 of those have no Bible in their heart language...that is 340,000,000 people; people who could be my mother, my sister, my cousin, my best friend...Imagine trying to learn about God having only a Russian or Arabic Bible to learn from... http://www.wycliffe.org/

Unique in its Translation

According to the United Bible Societies the Bible (or portions of it), has been translated into more than 2,200 languages.  Although this is only about one-third of the world’s 6,500 known languages, these languages represent the primary vehicle of communication for well over 90 percent of the world’s population.  Wycliffe Bible Translators have over 6,000 people working with more than 850 different languages in 50 countries to produce or revised versions of the Scriptures.  Of these, 468 languages are being translated for the first time.

According to Ted Bergman at the Summer Institute of Linguistics, if rate is consistent, the Bible should be available to almost all language groups between the years of 2007 and 2022.  This may mean that we are less than a generation away from witnessing the world’s first universally translated book.

Unique in its Survival

A.  Through Time:
1. Though written on perishable materials, and had to be copied and recopied for hundreds of years before the printing press, the Scriptures have never diminished in style, correctness, or ever faced extinction.  Compared with other ancient writings, the Bible has more manuscript evidence to support it than any ten pieces of classical literature combined.

“To be skeptical of the resultant text of the New Testament books is to allow all of classical antiquity to slip into obscurity, for no other documents of the ancient period are as well attested bibliographically as the New Testament.” ~ John Warwick Montgomery.

“Jews preserved it as no other manuscript has ever been preserved.  With their massora (parva, magna, and finalis) they kept tabs on every letter, syllable, word and paragraph.  They had special classes of men within their culture whose sole duty was to preserve and transmit these documents with perfect fidelity-scribes, lawyers, massoretes.  Who ever counted the letters and syllables an d words of Plato or Aristotle?  Cicero or Seneca?” ~ Bernard Ramm.

2.  The Bible has withstood attacks by burning it, outlawing it, and discrediting it.

C.Through Criticism:
The Bible is unique in its ability to stand up to critics, whether skeptics, liberal scholars, or intellectual movements.

“Infidels for eighteen hundred years have been refuting and overthrowing this book, and yet it stands today as solid as a rock.  Its circulation increases, and it is more loved and cherished and read today than ever before.  Infidels, with all their assaults, make about as much impression on this book as a man with a tack hammer would on the Pyramids of Egypt. When the French monarch proposed the persecution of the Christians in his dominion, an old statesman and warrior said to him, “Sire, the Church of God is an anvil that has worn out many hammers."  So the hammers of infidels have been pecking away at this book for ages, but the hammers are worn out, and the anvil still endures.  If this book had not been the book of God, men would have destroyed it long ago.  Emperors and popes, kings and priests, princes and rulers have tried their hand at it; they die and the book still lives.”~ H. L. Hastings.

“A thousand times over, the death knell of the Bible has been sounded, the funeral procession formed, the inscription cut on the tombstone, and committal read.  But somehow the corpse never stays put. No other book has been so chopped, knived, sifted, scrutinized, and vilified.  What books on philosophy or religion or psychology or belles letters of classical or modern times has been subject to such a mass attack as the Bible?  With such venom and skepticism?  With such thoroughness and erudition?  Upon ever chapter, line, and tenet? The Bible is still loved by millions, read by millions, and studied by millions.”~ Bernard Ramm.

Unique in its Teachings

Character (reports the sins of its characters, even when those sins reflect poorly on God’s chosen people, leaders, and the biblical writers themselves).

The influence of the Bible and its teachings in the Western world is clear for all who study history.  And the influential role of the West in the course of world events is equally clear. Civilization has been influenced more by the Judeo-Christian Scriptures than by any other book or series of books in the world.  Indeed, no great moral or religious work in the world exceeds the depth of morality in the principle of Christian love, and none has a more lofty spiritual concept than the biblical view of God.  The Bible presents the highest ideals known to men, ideals that have molded civilization.” ~ Dr. Norman Geisler and Dr. William Nix.

No other book has inspired the writing of so many other books as The Bible.

The Bible is a reliable collection of historical documents written by eyewitnesses, during the lifetime of other eyewitnesses.  They report supernatural events that took place in fulfillment of specific prophecy, and claim to be divine rather than human in origin. ~ Voddie T. Baucham, Jr. “The Ever-Loving Truth”
Top
Back