Anthropology is the academic study of humanity, which deals with the characteristics of the human experience ranging from the origins to the social and cultural organization of societies of human experience.  The term "anthropology" comes from the Greek word anthrōpos, “man”, and -logia, "discourse" or "study."

Man as a unique creation of God

Earth/man as the center of divine activity

The date of man’s origin

Evolution:  Definition-A gradual process in which something changes into a different and usually more complex or better form. Change in the genetic composition of a population during successive generations, as a result of natural selection acting on the genetic variation among individuals, and resulting in the development of new species.

The Flaws of Evolution:  The “missing link” is still missing...No design from randomness...Contradiction with scientific laws: Biogenesis, Second Law of thermodynamics...Statistical improbabilities...Young earth clocks...Not conforming to the scientific method

Why is Evolution Popular?:  “The evolutionary origin of man relieves man of responsibility to a personal Creator outside of himself.” Ryrie, Survey of Bible Doctrine, 101

"From a superficial reading of Genesis 1, the impression would seem to be that the entire creative process took place in six twenty-four-hour days. This seems to run counter to modern scientific research, which indicates that planet earth was created several billion years ago."  Gleason Archer, Survey of Old Testament Introduction (Chicago, IL: Moody Press, 1994.

10 Ways of Communicating Ages in Genesis 1:

Man versus Animals:
Similarities to the animals

Dissimilarities to the animals 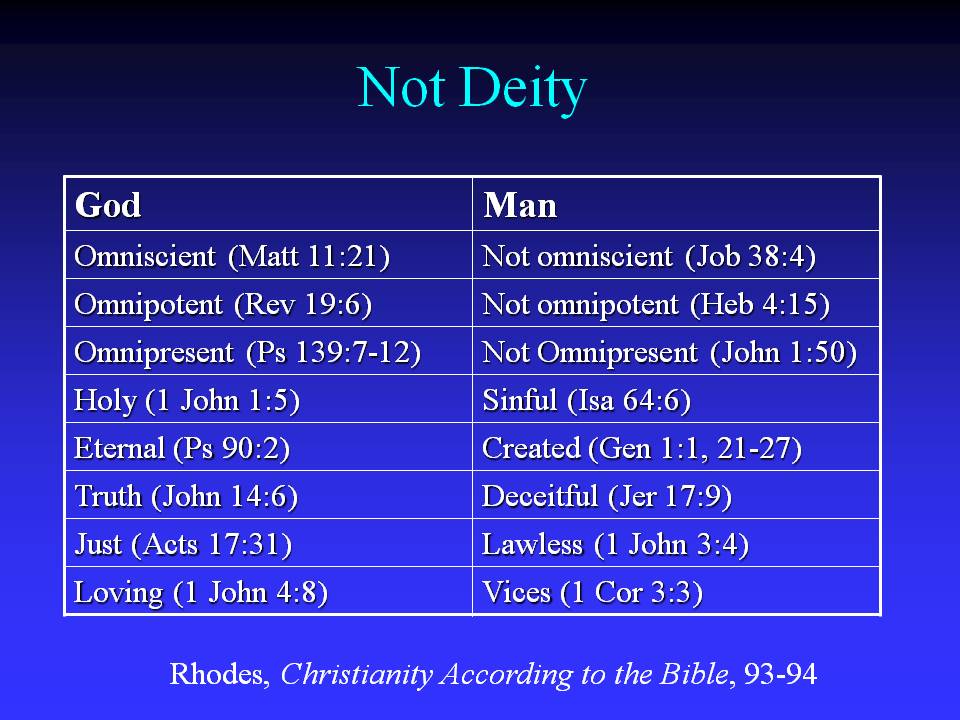 Designations for the body

Future of the body

I.What is the “Anthropic Principle”?

The anthropic principle (Gr. Anthropos, “human being”) states that the universe was fitted from the very first moment of its existence for the emergence of life in general and human life in particular.  For if there were even the slightest variation at the moment of the big bang, making conditions different, even to a small degree, no life of any kind would exist.  In order for life to be present today an incredibly restrictive set of demands must have been present in the early universe-and they were.

Not only does the scientific evidence point to a beginning of the cosmos, but it points to a very sophisticated tuning of the universe from the very beginning that makes human life possible.  Thus, for life to be present today an incredibly restrictive set of demands must have been present in the early universe.  Consider the following...

2.  If the gravitational force were altered by 1 part in 1040 (that’s 10   followed by 40 zeroes), the sun would not exist, and the moon would crash into the earth or sheer off into space.  Even a slight increase in the force of gravity would result in all the stars being much more massive than our sun, with the effect that the sun would burn too rapidly and erratically to sustain life.

3.  If the centrifugal force of planetary movements did not precisely balance the gravitational forces, nothing could be held in orbit around the sun.

4.  If the universe was expanding at a rate one millionth more slowly than it is, the temperature on earth would be 10,000 degrees C.

5.  The average distance between stars in our galaxy of 100 billion stars is 30 trillion miles.  If that distance was altered slightly, orbits would become erratic, and there would be extreme temperature variations on earth. (Traveling at space shuttle speed, seventeen thousand miles an hour or five miles a second, it would take 201,450 years to travel 30 trillion miles).

6.  Any of the laws of physics can be described as a function of the velocity of light (now defined to be 299,792,458 miles a second).  Even a slight variation in the speed of light would alter the other constants and preclude the possibility of life on earth.

7.  If Jupiter was not in its current orbit, we would be bombarded with space material.  Jupiter’s gravitational field acts as a cosmic vacuum cleaner, attracting asteroids and comets that would otherwise strike earth.

8.  If the thickness of the earth’s crust was greater, too much oxygen would be transferred to the crust to support life.  If it were thinner, volcanic and tectonic activity would make life untenable.

10. Surface temperature differences would be too great if the axial tilt of the earth were altered slightly.

12. If there were more seismic activity, much life would be lost.  If there was less, nutrients on the ocean floors and in river runoff would not be cycled back to the continents through tectonic uplift.  Even earthquakes are necessary to sustain life as we know it.

III.Comments
1.  Robert Dicke states, “that in fact it may be necessary for the universe to have the enormous size and complexity which modern astronomy has revealed, in order for the earth to be a possible habitation for living beings” [J. D. Barrow, The Anthropic Cosmological Principle (New York:  Oxford University Press, 1986), 247].

2.  “Likewise, the mass, the entropy level of the universe, the stability of the proton, and innumerable other things must be just right to make life possible” Norman Geisler, Baker’s Encyclopedia of Christian Apologetics (Grand Rapids:  Baker, 1999), 27].

3.  “The anthropic principle…seems to say that science itself has proven, as a hard fact, that this universe was made, was designed, for man to live in.  It’s a very theistic result” [Robert Jastrow, “A Scientist Caught between Two Faiths:  Interview with Robert Jastrow,” CT, 6 August 1982, 17].

4.  Astronomer Alan Sandage states:  “the world is too complicated in all of its parts to be due to chance alone.  I am convinced that the existence of life with all its order in each of its organisms is simply too well put together. Each part of a living thing depends on all its parts to function.  How does each part know?  How is each part specified at conception.  The more one learns of biochemistry the more unbelievable it becomes unless there is some kind of organizing principle-an architect for believers…” [“A Scientist Reflects on Religious Belief,” Truth (1985)].

IV.Conclusion
The “Anthropic Principle” is an updated Teleological Argument for God’s existence based upon the most recent astronomical evidence for His existence.
Top
Back