For the average reader of The Bible, The Book of Ezekiel is mostly a perplexing maze of incoherent visions – a kaleidoscope of whirling wheels and dry bones that defy interpretations.

The author of this book is “Ezekiel the Priest, the son of Buzi” (Ezekiel 1:3).  The name Ezekiel means “God will strengthen” or “God will harden”.

The date for Ezekiel’s ministry can be determined by noting the chronological notations in his book.

8:1..."It came about in the sixth year, on the fifth {day} of the sixth month, as I was sitting in my house with the elders of Judah sitting before me, that the hand of the Lord GOD fell on me there."  (NASB)

20:1..."Now in the seventh year, in the fifth {month,} on the tenth of the month, certain of the elders of Israel came to inquire of the LORD, and sat before me."  (NASB)

33:21..."Now in the twelfth year of our exile, on the fifth of the tenth month, the refugees from Jerusalem came to me, saying, "The city has been taken."  (NASB)

40:1..."In the twenty-fifth year of our exile, at the beginning of the year, on the tenth of the month, in the fourteenth year after the city was taken, on that same day the hand of the LORD was upon me and He brought me there."  (NASB)

The Book of Ezekiel was written during the time of Judah’s bondage to Babylon under Nebuchadnezzar’s rule.

Life in Judah:  Jerusalem was captured by the Babylonians in March 597 B.C....

2nd Kings verses Jeremiah 40...The removal of the landed citizens, officials and priests was probably partial, though it seems clear that a considerable social revolution was affected by the raising to position of greater influence of those who could be described as the ‘poor of the land’ (dallat ha’arets), the presumably property less members of the community who now came to be landholders or tenants under the Babylonian authority, perhaps occupying royal lands, perhaps also taking over lands which had been expropriated from other property-owners.” [Ackroyd, Exile and Restoration, 23 – 24]

Peoples Attitude: 11:3, 15; 9:9b; 33:24..."It is reasonable also to assume ...that there were many refugees from the Babylonian attacks who hid themselves in caves as their forefathers had done before them (Judge 6:1) and as their descendants were to do in later years.” [Ackroyd, Exile and Restoration, 24]

Ezekiel 18:2..."What do you mean by using this proverb concerning the land of Israel, saying, 'The fathers eat the sour grapes, But the children's teeth are set on edge'?"  (NASB)

Jeremiah 31:29... "In those days they will not say again, 'The fathers have eaten sour grapes, And the children's teeth are set on edge."  (NASB)

“A tantalizingly allusive piece of information about food allocations made to Jehoiachin and his family as well as to various craftsmen from Jerusalem, leaves us in doubt as to whether the exiles were treated as captives in the strictest sense, kept on small rations, or whether they were given reasonably generous allocations. [2nd Kings 24:14, 16] The subsequent reference to the release of Jehoiachin indicates imprisonment, but we have no means of knowing whether the imprisonment was constrictive or reasonably humane, except that it is clear that Jehoiachin’s royal status was acknowledged.” (Ackroyd, Exile and Restoration, 31)

Indirect information from Ezekiel and Jeremiah: “Here the indications are of reasonable freedom, of settlement in communities - perhaps engaged in work for the Babylonians, but possibly simply engaged in normal agricultural life - of the possibility of marriage, of the ordering of their own affairs, of relative prosperity.” (Ackroyd, Exile and Restoration, 32)

Note the location of Ezekiel (3:15..."Then I came to the exiles who lived beside the river Chebar at Tel-abib, and I sat there seven days where they were living, causing consternation among them."  (NASB)).  The ideas found in Psalm 137 and the distress of Ezekiel 4:14, the complaining of the injustice in Ezekiel 18 and the impossibility of escaping divine judgment in Ezekiel 37 set the mood of the Exile.

Although many have argued for the beginning of the synagogues in the exile, there is no “clear foundation.” Note however Kraus, Worship in Israel, 229 – 31.  The Sabbath and circumcision rites came into prominence.  (Ackroyd, Exile and Restoration, 35)

The Destruction of the Temple:

“Considered the footstool of God (Lamentations 2:1), dwelling place (1st Kings 8:13; Ezekiel 43:7), his resting place (Psalm 132:1), or the place where his face was to be seen (Isaiah 1:12 BHS), it had also opened the door to Canaanite influences and to the motion that God was the guarantor of the status quo."..."...the temple was a tangible symbol of the people’s election and a reminder of God’s unfailing actions in history on their behalf.” (Klein, Israel in Exile, 3)

The of the Davidic Dynasty:

“Kings had come and gone, but kingship itself and the state had endured through thick and thin. Now Zedekiah had been captured, his two sons had been murdered before his eyes, and then he had been blinded, His nephew, Jehoiachin, king himself for only three months in 597, sat in a Babylonian prison.” [Klein, Israel in Exile, 4]

Covenant broken by Israel in spite of Josiah’s attempt to revive Israel. As Jeremiah saw it, the covenant was broken. (Jeremiah 31:32) ¡The problem of the decimation of the priesthood thought exile and execution and by the cessation of sacrifices.

The Structure and Style

Structural balance – The first 24 chapters focus on the judgment of Judah; chapters 33 – 48 focus on the restoration of Judah.  The 2 extremes are balanced by chapters 25 – 32 which deal with God’s judgment on other nations.

Focus on the glory and character of God – By these means, Ezekiel presented his messages in dramatic and forceful ways; thus, getting the people’s attention so they would respond.

"Next to the books of Samuel and the Psalms the text of the book of Ezekiel is amongst the worst preserved in the books of the Old Testament." [Weiser]

"It is at once noticeable in MT how different things are in the separate complexes. Besides sections such as chs. 3, 6, 18, 20:1 – 31, 28:1 – 10, which are largely free from textual difficulties, as also the figurative discourse of ch. 15 and parts of other figurative sayings, other text appear badly disturbed, as in chs. 7, 21, 28:11 – 19 and elsewhere. These are certainly not always only sections which have a content that is difficult to understand, such as the elaborate description of the vision in ch. 1 or the building description of chs. 40 – 42. Rather the question arises whether already at the initial phase, before the redactional composition of the prophet’s words into a book, the individual sections were extant in differing qualities of preservation." [Zimmerli]

"Firstly, there are actual manuscripts of what we now know as canonical Ezekiel; though some of these are so small that they may simply preserve a quotation of Ezekiel in an excerpted or in a non-biblical text, until an exemplar of such a text is forthcoming, it is fair to assume that these manuscripts are copies of the biblical book in whole or in part."

"Secondly, there is the collection of manuscripts, so far only partially published, of what is known as Second Ezekiel (or Pseudo-Ezekiel), rewritten forms of parts of Ezekiel which in the rewriting contains intriguing items of editorial or even authorial concern."

"Thirdly, there are texts which explicitly cite and interpret Ezekiel in particular ways."

"Fourthly, there are non-biblical manuscripts in which certain section of Ezekiel seem to play a significant part.” [George J. Brooke, "Ezekiel in Some Qumran and New Testament Texts"] 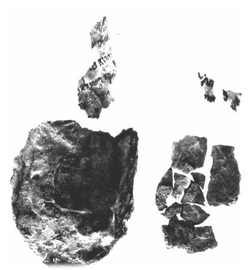 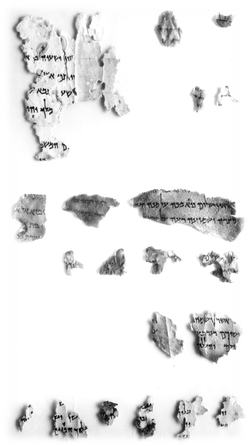 “...so-called Herodian script, in which are traces of three lines including the biblical hapax slql, making the identification with Ezekiel 16:31 – 33 almost certain; once again the letters that remain correspond exactly with the orthography of the MT." 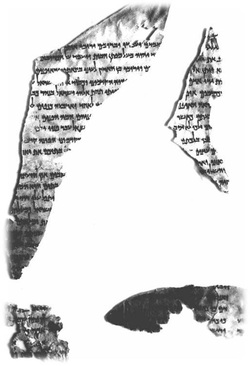 1. "Firstly, it is clear from other biblical manuscripts found at Qumran that not every manuscript was a deliberate copying of a whole biblical book."

2. "Secondly, all the manuscripts of Ezekiel described here are assigned roughly to the turn of the era."

3. "Thirdly, this matter of relative significance for their owners can be highlighted not only by noting the date of the manuscripts but also by a rough count of extant texts. Although we cannot be sure how many biblical manuscripts have survived in the Qumran caves and to what extent those that have survived represent what was deposited or possessed by those who occupied the site, nevertheless there is a relative paucity of Ezekiel texts." [Brooke]