Twelve fragments of 21 on display have never been viewed publicly; includes objects on loan from all over the world

The discovery of the Dead Sea Scrolls (parts of 800 manuscripts found in 11 caves) near Qumran on the Dead Sea is the archaeological find of the 20th Century.  About 50 years after the initial discovery, all of the scrolls have been published.  However, controversies around the scrolls have not abated.  Among the questions still blazing are as follows...

Was Qumran, located below the scroll caves, connected with the scrolls?

Was Qumran an Essenes monastery, a Jewish fortress, a fortified farm, or a villa rustica for wealthy vacationers?

Are the scrolls the private library of an offbeat Jewish sect?

Are the scrolls the library of the Temple of Jerusalem, taken to the caves of the Dead Sea for safekeeping during the destruction of Jerusalem in 70 A.D.?

Do the scrolls undermine Christianity or simply add greater context to our understanding of the Jewish roots of Christianity?

Is the fabulous treasure described in the Copper Scroll real? If so, is it still “out there” in the Judean desert, waiting to be found?

Muhammad ed Dhib (“The Wolf”)...the gentleman to the right...is credited in the initial findings. 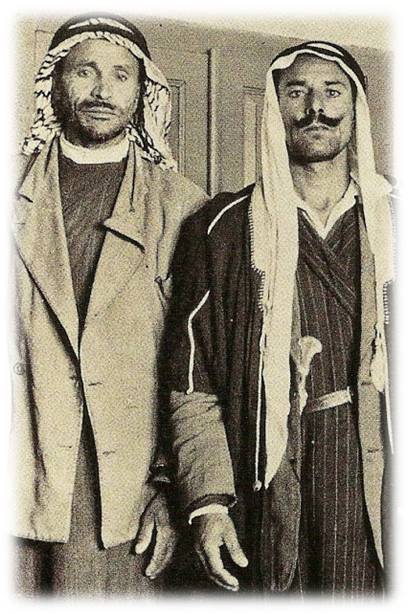 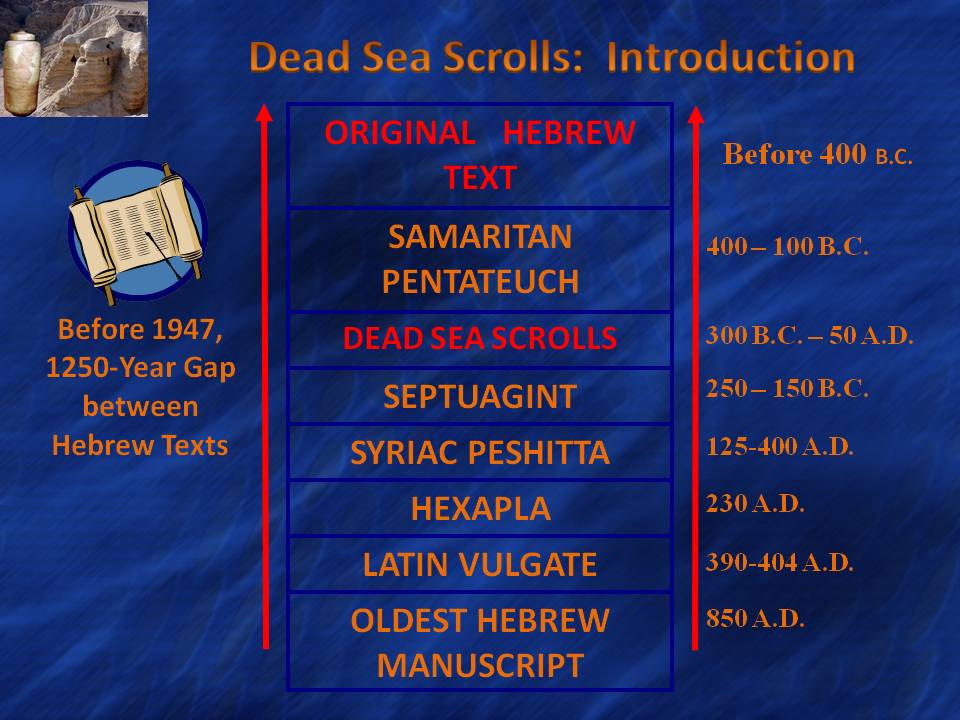 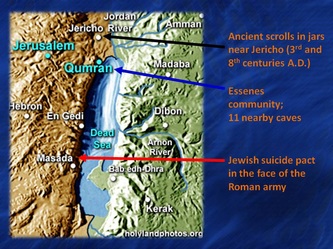 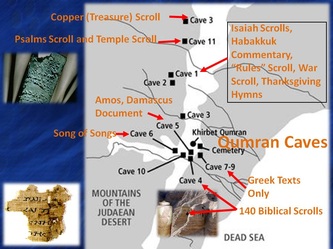 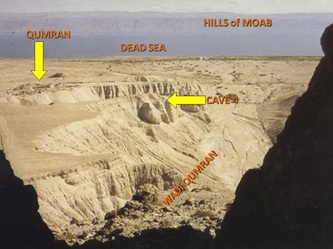 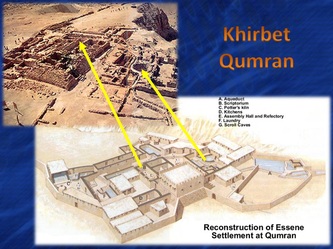 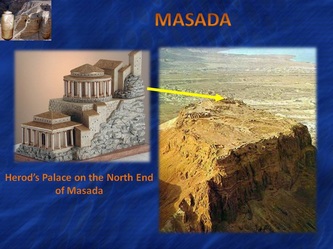 A “villa rustica”, sort of a resort for rich Jerusalemites (Robert Donceel and Pauline Donceel-Voute)

A Judean military fortress, destroyed in the battle against the Romans (Norman Golb)

Father Roland de Vaux, who excavated the site in 1951/56, first promulgated the view of the site as an Essenes monastery. Adding to the conspiracy theories regarding the scrolls is the fact that de Vaux died in 1971 without publishing his final report on the site. The report still has not been published to this day, although the Ecole Biblique published photos and plans from de Vaux’s excavation 1994.  The timeline established by de Vaux for the site is something like this:

2nd Century B.C. - the site is re-occupied after a long abandonment

31 B.C. - an earthquake damaged the site, causing cracks (which can still be seen today) in foundations and stairs

68 A.D. - the site was destroyed (out of the 1200 coins that were found at the site, none dated after 68 A.D.), and perhaps briefly occupied by the Roman army

The period of time related to the theory that the site is connected with the sectarians is from the re-occupation in the 2nd Century B.C. to the destruction in 68 A.D. This time period, of course, correlates roughly with the estimated ages of the scrolls.  So how did de Vaux decide that the site was an Essenes monastery? One part of the puzzle is a quote from Pliny the Elder (23 – 79 A.D.), which states that the town of En Gedi (see map), which is located about midway down the west coast of the Dead Sea, was “lying below” a settlement of Essenes:

“Lying below the Essenes was formerly the town of Engedi, second only to Jerusalem in the fertility of its land and in its groves of palm trees, but now like Jerusalem a heap of ashes.” (The People of the Dead Sea Scrolls: Essenes or Sadducees?, James C. Vanderkam, Bible Review, April 1991)

This seems plausible enough – there aren’t any other known sites between En Gedi and Qumran that could have been an Essenes settlement. However, some scholars have postulated that “lying below” doesn’t mean “south of”, but rather that the Essenes settlement was on the hill overlooking En Gedi. Father de Vaux excavated a room where he found two inkwells (a third was later found in another room) and some strange shelf-like objects. Interpreting that the shelf-like objects were desks, he promptly christened the room the “scriptorium” (a medieval monastic term), and decided that this was where the scrolls must have been written.  He excavated a large room which contained a number of dishes and goblets, and called it the “refectory” (another medieval monastic term).  He excavated 50 graves out of the 1200 on the site.  Finding only 3 – 4 women/children, he decided that this fit well with the idea of a site populated by celibate males.  He interpreted the elaborate water/cistern system as evidence of the importance of water purification rites to the inhabitants.  Pottery found in caves and at the site were similar.  Also, a kiln was found that may have fired the pottery found in the caves.

While interesting, the evidence put forth by Roland de Vaux that Qumran was an Essenes monastery is inconclusive. Among the arguments against the concept:

No manuscripts of any kind were found in the site excavation, although other organic materials were found, such as palm leaves, wood, reeds, etc.

When attempts were made to re-construct the shelf-like objects, it seems to show that they would be the wrong height to act as desks.

Robert Donceel, and his wife Pauline Donceel-Voute were engaged by the Ecole Biblique et Archeologique Francaise to write a final report based on the notes of Father de Vaux. They have argued that de Vaux found many luxury goods during his excavation, which are not in keeping with an ascetic group like the Essenes.

The 1200 coins discovered within the site seem to indicate that Qumran might have been some sort of commercial center.

No synagogue was found.

No religious objects were found in the excavations.

The arguments continue to this day.

The Dead Sea Scrolls and The Old Testament 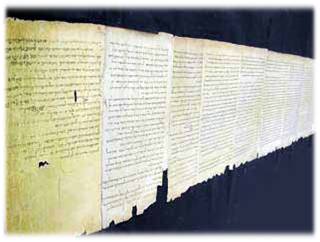 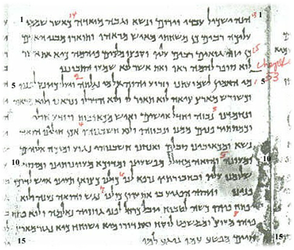 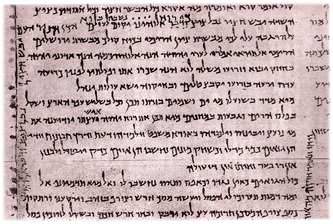 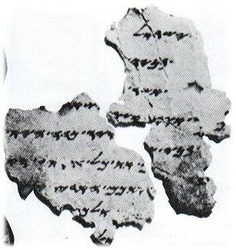 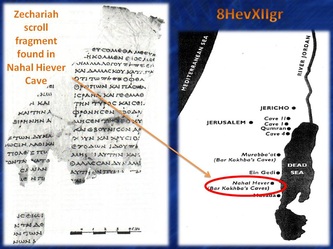 The Dead Sea Scrolls and The New Testament 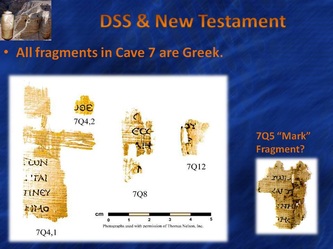 With the discovery of the Cave 4 scrolls in 1952, the Ecole Biblique et Archeologique Francaise was faced with a daunting task – assembling 25,000 fragments into what was later estimated to be 500 documents. To accomplish this huge task, a team of scholars was assembled in 1953/54 to reassemble, translate, and write commentaries on the Cave 4 scrolls.  The team included:

Controversy surrounded the team from the beginning. First, none of the scroll editors were Jewish. Second, there were concerns about how the scroll fragments were handled - these extremely fragile documents were often handled with bare hands, and were sometimes joined together with scotch tape. The fragments also were not stored in a temperature/humidity controlled environment, leading to eventual deterioration. Amazingly, though, the work of assembling and translating the documents was essentially done by 1960 – an amazing feat!  However, by 1985, less than half of the Cave 4 scrolls had been published. This 25 years of seeming silence led some to suspect that there was some sort of conspiracy regarding the scrolls – that they were being held back because of potentially explosive material contained within. The reality is probably more mundane – a combination of lack of funds (funds ran out in the 1960’s, after the death of John D. Rockefeller) plus personal and political factors, as well as scholarly inertia inhibited further scroll publication.

By the late 1980’s, the Biblical Archaeology Society, under the heroic efforts of Hershel Shanks (right), began a campaign to get the scrolls published. Major newspapers and magazines around the world picked up Shanks’ battle cry.  In September of 1991, to force the issue, Biblical Archaeology Review (edited by Hershel Shanks) published a computer-reconstructed translation of the unpublished Cave 4 scrolls, using an unpublished concordance that had been created in the late 1950’s. Also in September, the Huntington Library in San Marino, California published photographs of the unpublished scrolls that had been found in a safe in the library. Apparently, they had been sent there for safekeeping in the 1950’s by the Scroll Team, but no non-disclosure agreement had ever been signed with the Library.  Finally, in November of 1991, the Biblical Archaeology Society published their own photographs of the Scrolls, given to them by an anonymous source.  The “scroll cartel” was broken!  Eventually, Shanks and the Biblical Archaeology Society were sued by scroll scholar Elisha Qimron of Ben-Gurion University, who was reconstructing the aforementioned MMT text.  Qimron eventually won the case, and was awarded 100,000 shekels – but the Cave 4 scrolls are no longer a mystery.

The following is a paper I, Bryan D. Stallings, personally wrote. I am sharing it with you that it might further aid in your studies. To copy/paste this paper and submit as your own is PROHIBITED! 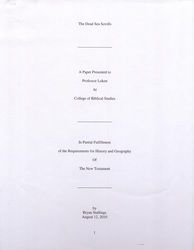 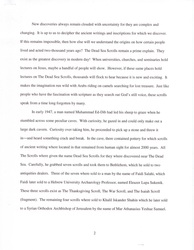 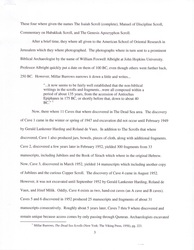 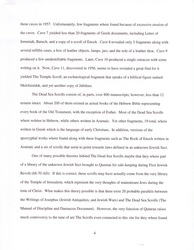 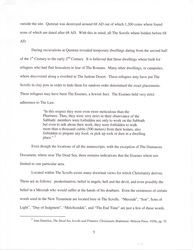 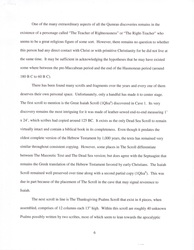 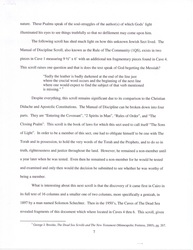 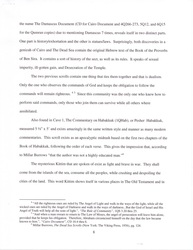 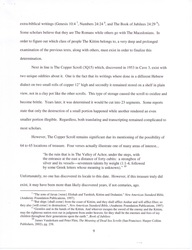 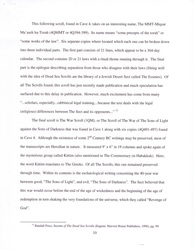 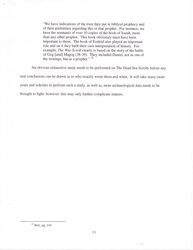 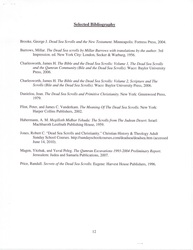