The Book of Proverbs is a book of moral and ethical instructions dealing with many aspects of life.

Presumably Solomon wrote Song of Songs in his early adult years, Proverbs in his middle years, and Ecclesiastes near the end of his life.

The frequent occurrence of the address “my son” and “my sons” in this book has raised some question about the relationship between Solomon and his “audience”.

The Book of Proverbs focuses on human character and conduct.

1.)  The meaning of the word “proverb” translates masal which probably comes from a verb meaning “to be like”.

3.)  A proverbs convey a general truth.

4.)  Wisdom is knowing the right time and circumstance to apply the correct principle.

5.)  Proverbs are written in poetic form.

Foolishness vs. Wisdom, Laziness vs. Diligence, Pride vs. Humility, Deceit vs. Honesty, Ignorance vs. Knowledge, Hatred vs. Love, Rebellion vs. Obedience, Relationships with the opposite sex 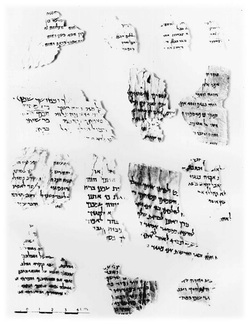 "Only scraps of two scrolls of Proverbs were found (4Q102 & 4Q103). . . , and one of those has only two fragments. . . . There are only a few variants, each presumably inadvertent, involving only a single look-alike letter but yielding noticeable differences in meaning." [Abegg, Flint & Ulrich]

"One verse of Proverbs is cited explicitly by one of the principal books of the Qumran community, the Damascus Document. The command is given not to send an "offering to the altar through anyone impure…; for it is written, 'The sacrifice of the wicked is disgusting; but the prayer of the righteous is like a proper offering'." (CD 11:19 – 21). The formula "for it is written" is sometimes used to introduce authoritative Scripture for deciding a course of conduct, but sometimes, as here, it is used simply to buttress a commonsense practice…4Q525…4Q184."[Abegg, Flint & Ulrich]

"The text is not in good condition; errors are more frequent in II.-V. (10 – 31) than in I.(1 – 9), the simple style of the latter having saved it to some extent from scribal misunderstandings and misrepresentations.  The mistakes are to be set down partly to the ignorance of copyists, partly to the freedom which they allowed themselves in dealing with this book as with other Old Testament books . . . . It does not appear that changes were made in Proverbs in the interests of theological opinion or from a sense of propriety or decency. Such changes were made in other Old Testament books; the immunity of Proverbs is due in part to its untheological character, in part to the fact that it was looked on as less sacred and authoritative than the Pentateuch and the Prophetic writings." [Toy]

The Relationship of Proverbs to Other Ancient Wisdom Literature

"It is an independent witness to God's revelation which functions like the Law and the Prophets as sacred scripture for the people of God.“  It was "through debate within the wisdom tradition which sought to interpret and supplement the early stages of wisdom in the light of a fuller understanding of the divine ordering of the word and human experience." [Childs]

"The canonical ordering of chapters 10 ff. has not attempted to arrange the proverbs into any clearly discernible topical or historical order.  Indeed, it has retained the sharp polarities, even flat contradictions, in successive proverbs which derived from the earliest collections.  One hermeneutical implication to be drawn from this shaping is that the proverbs continue to function within scripture in their original dialogical role.  The significance of the proverb does not lie in its formulation of timeless truths, but in the ability of the wise man to use the proverb in discerning the proper context by which to illuminate the human situation." [Childs]

"The point has been repeatedly made that the didactic function of the book of Proverbs which was highlighted by the editor's using chapters 1 – 9 as a framework for the whole composition served a far broader role than what is implied by the modern use of the term 'ethics'.  When the wisdom teacher challenged his pupil to pursue wisdom, it involved not only moral decision in respect to right behaviour, but was an intellectual and highly pragmatic activity as well which sought to encompass the totality of experience." [Childs]