ORIGIN OF THE WRITTEN TEXT 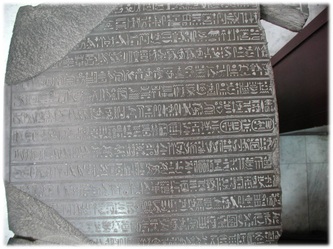 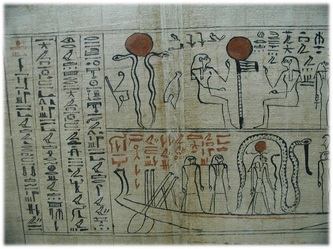 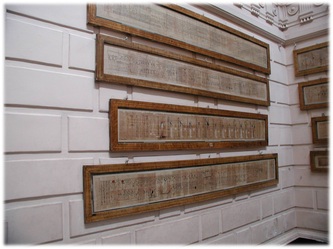 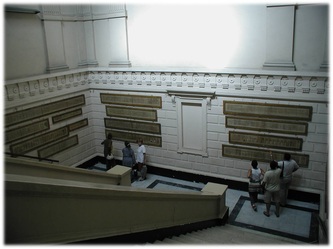 The pictures above are images of early writings.  This begs the question...

How Was the Bible Written?

Scrolls
Sheets of papyrus glued together

Spread of Christianity the main reason?

All words ended in vowels or one of three consonants (ν,ρ,ς) so were easy to read.

Hebrew
Vowels not written until 5th - 10th Century A.D. by the Massoretes

Divisions of the Text

After Protestant Reformation....Divisions in margins in 1330 A.D.

Chapters...350 A.D.– in the margins of Codex Vaticanus...Matthew had 170 sections
1227 A.D.– Current chapter divisions by Stephen Langton Professor at University of Paris...Later The Archbishop of Canterbury

Papias (~130 A.D.)...Interested in texts, but demonstrates that oral tradition is still “king” at this time “I did not think that information from books would help me so much as a living and surviving voice.”  No surviving works. Fragments recorded by Eusebius.  “Expositions of the Sayings of the Lord”.  Collection of sayings he had heard from ‘students of elders who claimed to have known the first disciples’.

Basilides(~135 A.D.)
Gnostic
Composed the ‘Exegetica’
Commentary on Gospel story
Unknown whether he used oral or written sources
Considered heretical
Until this point, the only authority cited was “Jesus” or “Christ”
Basilides ‘Exegetica’ started the doctrinal battles.
Essentially drawing a line in the sand, implying that you either agreed with him or you’re a heretic.
The need to establish Church authority to dictate or preserve doctrine was beginning.

Paul vs. the Jewish Christians
We see some of this in the varying doctrines expressed in the New Testament.
Some of the disagreements are catalogued in the Bible (Acts)

Romans vs. Jews
Pressure on Christians (echoing this Pauline conflict)
Began the “us and them” claims

Marcion (~144 A.D.)
Proposes a reform of Christianity
Old Testament is contradictory and barbaric
Only Paul’s writings are true
The true writings weren’t Jewish
Expelled from the church and formed his own
Gnostic beliefs
Jesus wasn’t human
No Hell
Established the first Canon...10 Epistles and one Gospel
Gospel later identified by Tertullian as that of Luke, but with the nativity and all Old Testament references removed
Commentary retained
Written prefaces used for the Latin Vulgate

Montanism (~156 A.D.)
Similar to Protestant (Pentecostal) movement
Speaking in tongues
Individual interpretation
Non-clerical authority
Made the common man as good as a Priest
Apocalyptic movement
Eventually leads to the conflict over canonizing the Revelation of John

Priests would travel and ‘review’churches to determine if their doctrine was sound.

Those who went along were rewarded

Despite Marcion’scanon, the Montanism heresy and the doctrinal issues, there is still no attempt to create an orthodox canon at this time (~175 A.D.).
Top
Back