The Use of the Apocrypha in the New Testament 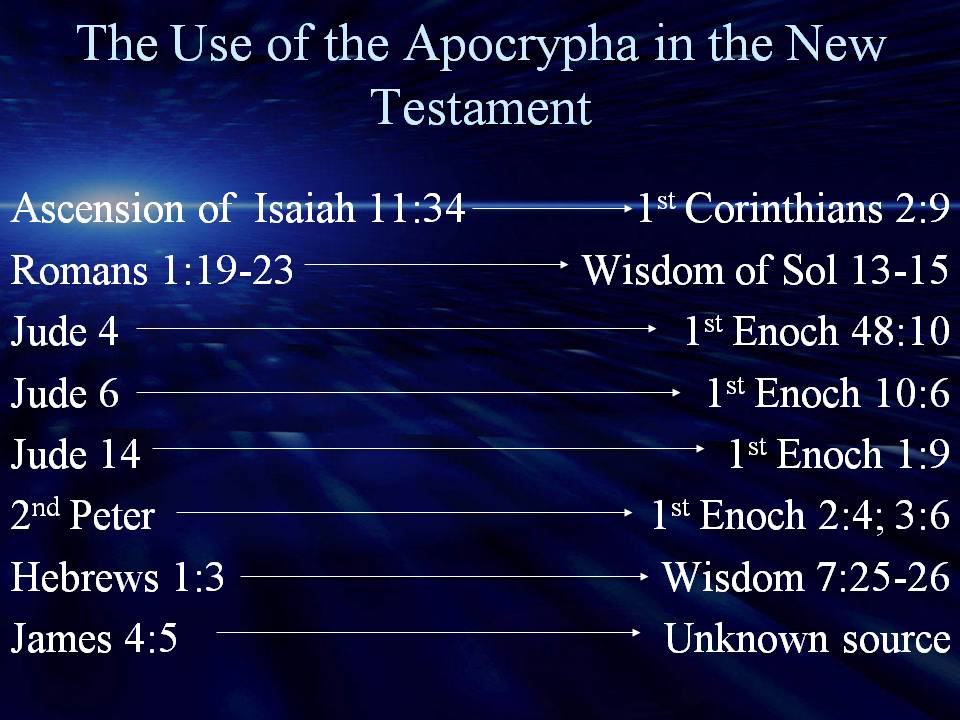 New Testament Use of the Old Testament

Jesus does not quote from Judges, Ruth and Esther

Luke 24:44..."Now He said to them, "These are My words which I spoke to you while I was still with you, that all things which are written about Me in the Law of Moses and the Prophets and the Psalms must be fulfilled." (NASB)

Only clear reference to the third division of the Old Testament in New Testament.

Therefore Old Testament canon in time of Jesus appears to be the Law, Prophets and an undefined section, the Psalm

Against Apion 1:37 – 43:  "Our books those which are justly accredited, are but two and twenty and contain the records of all time.”

2. A book originally written in Hebrew

3. A book used by Christians suspect, e.g. the Apocrypha

4. Conformity to the Torah

6. Reject the LXX because Christians used it.  Replaced with Aquila’s translations from the Hebrew.

Song of Songs: There seems not be nothing about God therein, other than what is derived from interpretation

Ezekiel:  It appears to be in conflict with The Torah

Ecclesiastes:  Its authorship by Jeremiah was in doubt

Canon Lists of the of the Early Church

When the early church began to compile lists of Old Testament books none of the various lists were identical.

Note: Melito bishop of Sardis was the first to offer a list of books that make up the Old Testament canon of scriptures, his list contains 22 books including Wisdom of Solomon but exclude Esther. 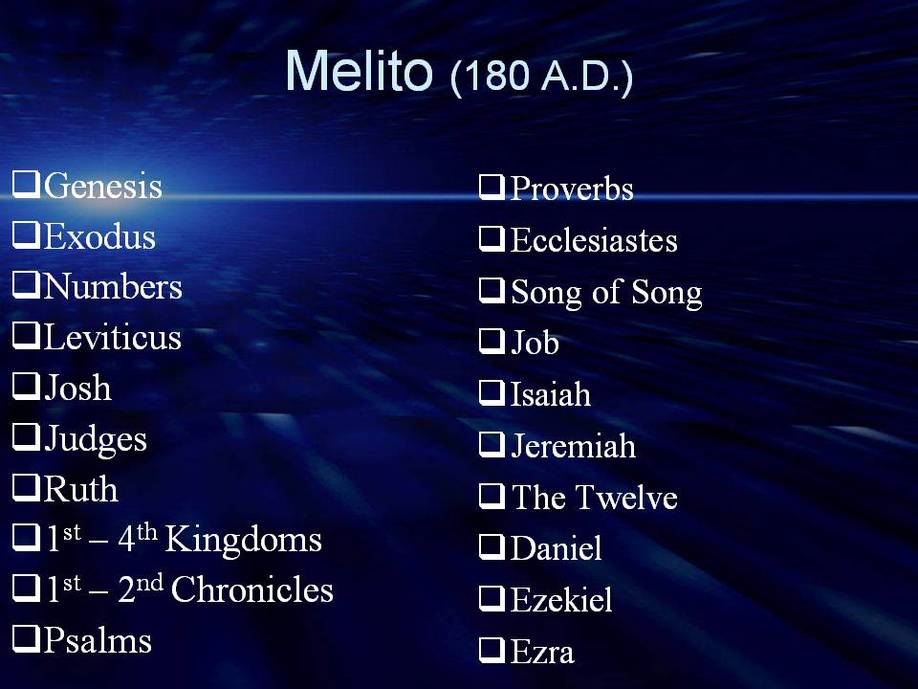 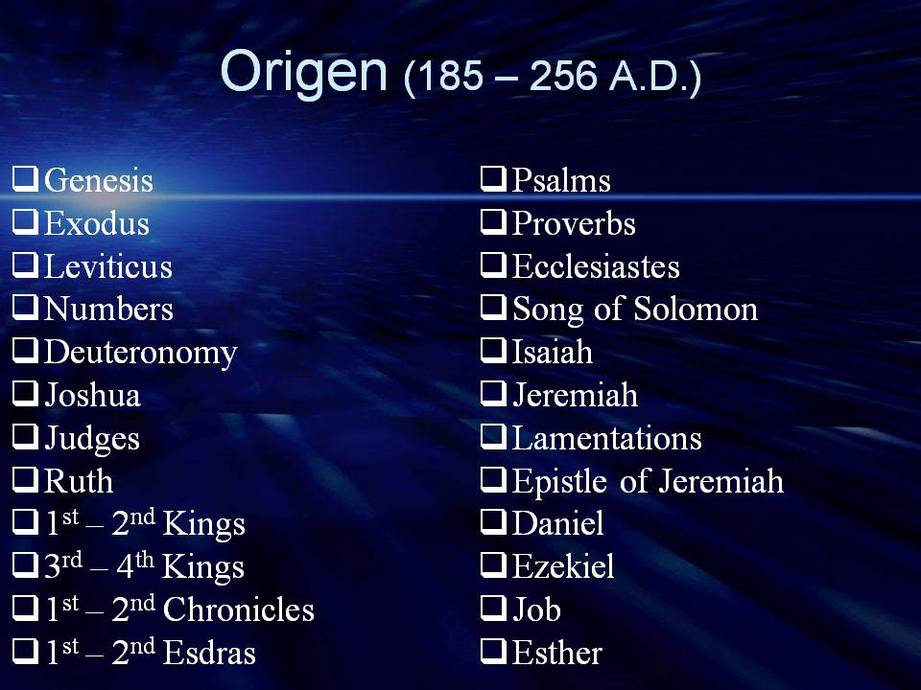 Origen:  A Christian diet should include Old Testament Apocrypha, Esther, Judith, Tobit, Wisdom the Psalms and the Gospels. 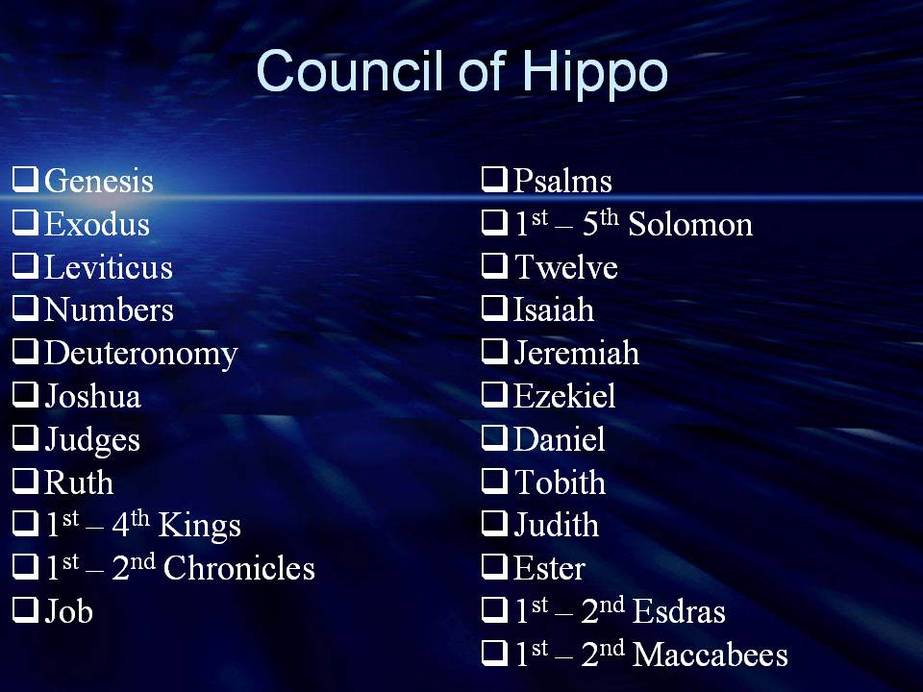 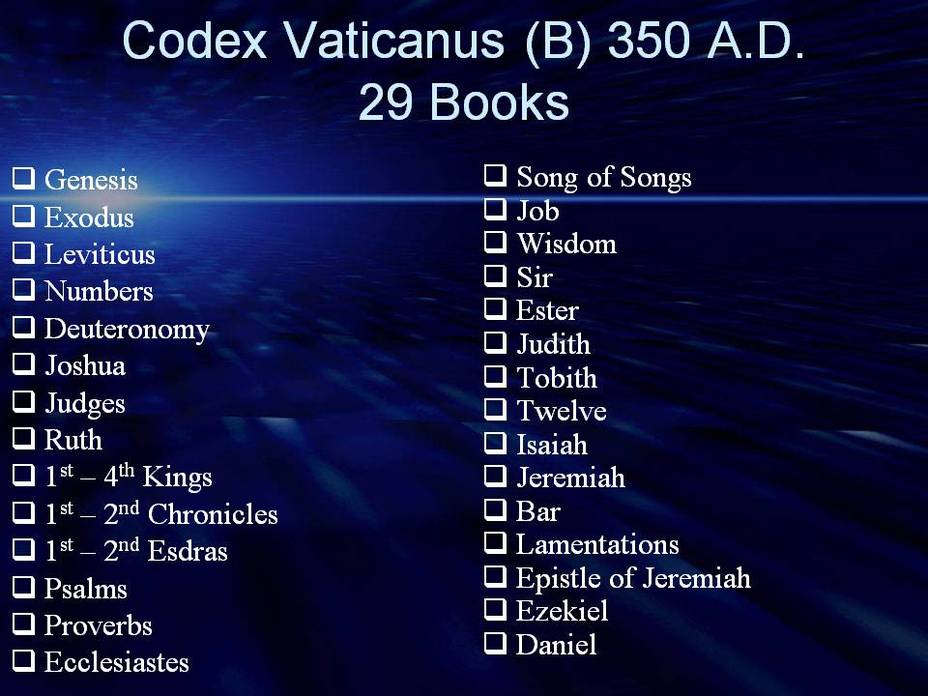 Canon of The Reformation and Beyond

The Protestant Canon is derived from Luther’s choice of books. He rejected the books that supported the Catholic doctrines which he rejected e.g. (2nd Maccabees 12:45 prayer for the dead)

*Note: he also rejected James and Revelation, and Ester*

"I hate Esther and 2nd Maccabees so much that I wish they did not exist, they contain too much Judaism and no little heathen vice." F. F. Bruce, Canon, 101

Separated the Apocrypha from the Old Testament, place in appendix of his Bible

“The contracted conservative Jewish canon of the 2nd century eventually became the Protestant canon, not the more elaborate canon of Jesus’ day.”

“This is confirmed by the more than 150 references or allusion to the Apocrypha and pseudepigraphal literature in the New Testament.”

The Counsel of Trent: April 8,1546...affirmed Jerome’s Latin Vulgate as official Bible of the Catholic Church, but The Protocanonical and Deuterocanonical books should not be distinguished.
Top
Back