1.  Definition and Meaning of Trinity

The Word “Trinity” means that God is a triunity:  He is a plurality within unity.  God has a plurality of persons and a unity of essence; God is three persons in one nature.

2.  Historical Overview of the Trinity
Ancient Church and the Trinity (100-600)

Modalism:  Also called sabellianim after its founder in 217-220, Sabellius, Modalism holds that God is only one person who appears in different modes or roles at different times in the divine economy.

Tritheism:  the belief that there are three gods or three separate beings in the Godhead.  Few, if any, have held this view consciously, though unwittingly many have fallen into it verbally by their incautious language about the Godhead.

Arianism:  Following Arius (c. 250-336), its founder, this heresy denies that Jesus is fully God, allowing Him a created status below God.  Arianism was opposed by Athanasius and condemned as heretical at the Council of Nicea.

Docetism:  From the Greek word, “dokeo,” “I seem,” docetism affirms the deity of Christ but denies His humanity, claiming it was only an apparent, but not real, humanity.

Nestorianism:  It is doubtful that Nestorius (d.c. A.D. 451) held the view bearing his name, though some of his followers ae credited with it.  This perspective posited not only two natures in Christ (which is orthodox) but also two persons (which is not).  Allegedly, if there is both a human and a divine person in Christ, then it was only the human person who died on the cross; hence, His sacrifice for our sins would have no divine efficacy.

3.  Descriptions of the Trinity
There is only one “What” (essence) in God, but there are three “Whos” (persons) in that one “What.”

There are three “Subjects” in one “Object.”

Three Links in a Chain:  Trinity is a three-link chain.  The problem here is that the links are three different things.  So in spite of whatever good motivations there may be behind it, what is being illustrated is tritheism, not trinitarianism.  God is only one thing (substance), not three different ones joined together in some way.

Human body, soul, and spirit:  Human Body, Soul, and Spirit.  God is like man, who has body, soul, and spirit and yet is one.  Even apart from the implied trichotomy, one problem with this is that the human soul and body separate at death.  The members of the Godhead are inseparable.  Further, God, has no body-He is pure Spirit (John 4:24).

The following are better illustrations because three different elements exist in an undivided oneness at the same time:

A Triangle:  God is like a triangle, which is one figure yet has three different sides at the same time-there is a simultaneous threeness in the oneness.  Of course, no analogy is perfect, since in every analogy there is a similarity and a difference.  The difference here is that “corners” are not persons.  Nonetheless, they do illustrate how there can be a “threeness” and a oneness at the same time.

God is love (1st John 4:16):  “God is love” (1st John 4:16), and love involves three elements:  a lover, a beloved, and a spirit of love.  These three are one.  One advantage of this example is that it has a personal dimension, in that love is something only a person does.

Mind, ideas, and Words:  God is like the relation between my mind, my ideas, and my words.  They are all distinct, yet they are united, for one’s words cannot be separated from his ideas, and his mind behind them.  What is the essence?

6. The Personal Nature of The Holy Spirit

The Holy Spirit is personal

The Holy Spirit has feelings - Ephesians 4:30

7. The Deity of The Spirit

The Holy Spirit is given names which are only appropriate to GOD (Romans 8:9, 1st Peter 1:11)

The following is a paper I, Bryan D. Stallings, personally wrote.  I am sharing it with you that it might further aid in your studies.  To copy/paste this paper and submit as your own is PROHIBITED! 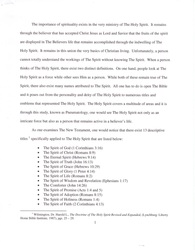 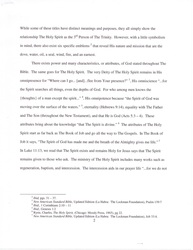 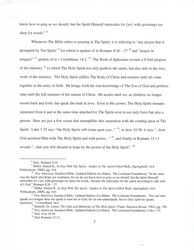 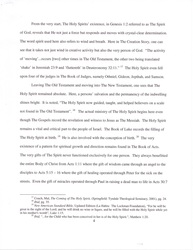 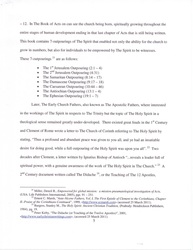 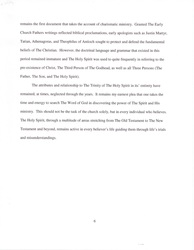 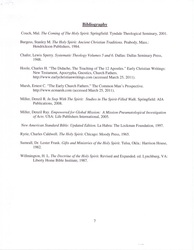