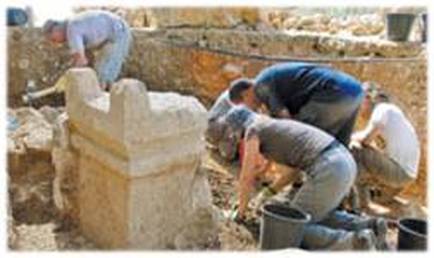 Archaeologists excavating at the Philistine site of Tell es-Safi/Gath in Israel’s southern coastal plain have discovered a rare horned altar dating to the ninth century B.C.E. The stone altar, which stands more than 3 feet tall, is the earliest ever found in Philistia.

The top of the altar was outfitted with a pair of horns, a feature reminiscent of ancient Israelite altars described in the Hebrew Bible (Exodus 27:1–2; 1st Kings 1:50) and, more rarely, found in archaeological contexts. But while Israelite altars have four horns, the Philistine altar found at Gath only has two.

The altar is a small, but an impressive and special window into the Philistine and Israelite cultures of the time in general, and their rituals in particular,” said Aren Maeir, director of the Tell es-Safi/Gath excavations. “It’s not every day we find items from Biblical times so closely related to items described in the Biblical text.”
Back