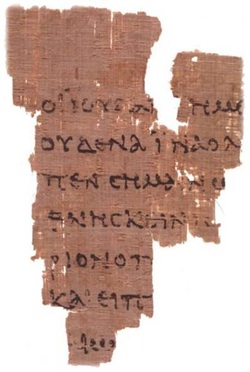 90 – 400 A.D.:  Rabbis begin to discuss the extent of the canon and, over time, include in their canon only 39 books, since only these can be found in Hebrew (scholars are no longer sure when or how a final decision was reached).


51 – 125 A.D.: The books of today’s New Testament are written.
But during this same period other early Christian writings are produced:

200 BC: Rabbis translate the Jewish Bible from Hebrew to Greek, a translation called "The Septuagint" (abbreviation: "LXX"). The LXX ultimately includes 46 books.

30 – 100 A.D.: Christians use the LXX as their scriptures (because most cannot read Hebrew). 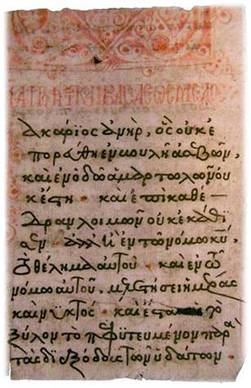 Allusions to the destruction of Jerusalem

Clement of Rome (95 A.D.)...Popular in early churches...Never quotes a Gospel, including Mark...If Mark wrote to a Roman audience Clement should have known...Considered scripture by many in the early church...Referred to Pauline Epistles as wise council...Only Old Testament writings are referred to as scripture...His quotations of Jesus are from no known source

Didache (50 – 120 A.D.)...Most likely 110 A.D....Manual on Christianity and Church Hierarchy...Quotes the Gospel of Matthew, verbatim, calling it ‘The Gospel’...Regarded as canonical scripture by Clement of Alexandria, Origen an others...Source attributed to itinerant evangelists
Polycarp and contemporaries (115 A.D. ) John’s disciple...“as it is said in these scriptures”

Athanasius of Alexandria (367 A.D.)
Earliest list of books exactly as what we have now, called them the “New Testament”
Shortly thereafter: Jerome and Augustine agree, define the New Testament canon of 27 books. 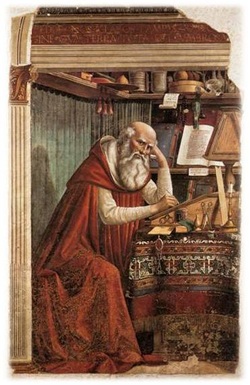 400: Jerome translates the Bible from Hebrew and Greek into Latin (called the "Vulgate").
He knows that the Jews have only 39 books, and he wants to limit the Old Testament to these.  The 7 he would leave out (Tobit, Judith, 1st Maccabees, 2nd  Maccabees, Wisdom of Solomon, Sirach [or  "Ecclesiasticus"], and Baruch) he calls "apocrypha," that is, "hidden books."  But Pope Damascus wants all 46 traditionally-used books included in the Old Testament, so the Vulgate has 46.

After training with Justin, heads to Syria in 172 A.D. to found a church

Selects 4 gospels and writes the Diatessaron

“That which is through the four”...Harmonized account of the current 4 gospels

This establishes the Syrian canon as:  Diatessaron

Paul’s Epistles (no idea which ones), Acts

Shepherd of Hermas (95  – 150 A.D.)...Universally popular (along with The Epistle of Barnabas)...Was included (with Barnabas) as the final books of the New Testament in the oldest codex. 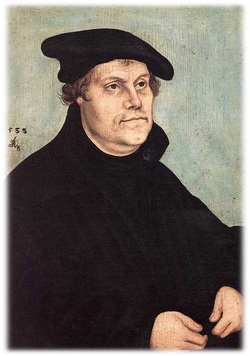 1536: Martin Luther translates the Bible from Hebrew and Greek to German....He assumes that, since Jews wrote the Old
Testament, theirs is the correct canon...He puts the extra 7 books in an appendix that he calls the "Apocrypha." ...This is the Old Testament that most Protestants use (Anglicans also use the Apocrypha devotionally).

In his translation of the Bible from Greek into German, Luther removes 4 New Testament books (Hebrews, James, Jude, and Revelation) from their normal order and places them at the end, stating that they are less than canonical.

Most other Protestants do not agree with him.
Erasmus (1466 – 1536)
Chastised by the church for doubting the authorship of Hebrews and other books
Renounced his former questions and said “the opinion formulated by the Church has more value in my eyes than human reasons, whatever they may be”
Went on to create the Textus Receptus

Tests for Inclusion into The Canon (Geisler/Nix)

5.  Was it accepted by the people of God? (1st Thessalonians 2:13)
If you want to read them: www.earlychristianwritings.com/
Top
Back