Issues regarding Inspiration of Scripture:  Theories of Inspiration contain issues like the role of the human element (individual styles and personalities), divine element (God’s role in “breathing out” the Scriptures), and the results of the divine-human authorship (recorded without error in form & content).  The Bible is God’s special revelation.  It is God’s Word.  This concept is captured in the theological term, inspiration (will be discussed later).  The word inspiration is found in 2nd Timothy 3:16, where the original Greek is theopneustos, which literally means “God-breathed.”   However...

what are mechanics of this inspiration?

exactly did God breathe out his words into the Bible?

The 6 Mechanics of Inspriation

Human authors just took dictation from God as he spoke.

The biblical author is a passive instrument in the transmission of the revelation of God.

The personality of the author is set aside to preserve the text from fallible human aspects.

These authors were mere secretaries who wrote only the words they were told to write.

Only the doctrines of Scripture that were unknowable to the human authors were inspired.

This view allows for errors of various sorts in the Scripture.

Typically adherents to this view believe that the message of salvation is inspired whereas matters related to such things as chronology, history, and science may be in error.

Moreover, some advocates of this view contend that the general ideas may be inspired but gave the human author the freedom in the manner of expressing it.

Conceptual inspiration:  God inspired human authors with the general concepts of the passage, but left the words and details to the author.

God gave an idea or concept to the writer who then penned the idea in his own words.  Thus, there can be errors in Scripture because the choice of the words is left to the writer and is not superintended by God.

Typically adherents to this view believe that the message of salvation is inspired whereas matters related to such things as chronology, history, and science may be in error.

Only gifted individuals with exceptional insight where chosen by God to write The Bible.

Inspiration is reduced to an artistic ability or a natural endowment.

Human authors themselves are inspired by God in the same way God inspires any Christian today through the ministry of the Holy Spirit. It differs from natural inspiration in a matter of degree, but not in kind.

The human authors were enabled by God to write the Scriptures.

Barthian or Neo-Orthodox Theory of Inspiration

Bible is not to be exactly equated with the Word of God because God does not speak in mere propositions.

God does reveal information about Himself; He reveals Himself.

Thus, The Bible is a vehicle to take you into an encounter with God Himself.

God inspired human authors with each word, superintending even the details.

God used the individual authors and their personalities to record exactly what God wanted recorded.

Inspiration extends to the very words of Scripture including tense of verb and formation of letters (verbal).

Thus, the entire text of Scripture (plenary) is inspired.

Verbal, plenary inspiration means that the Scriptures are the product of the mind of God expressed in human terms and conditions.

For example, one proponent of verbal, plenary inspiration is Dr. Charles C. Ryrie. He writes:
“Inspiration is…God’s superintendence of the human authors so that, using their own individual personalities, they composes and recorded without error His revelation to man in the words of the original autographs.” ~ A Survey of Bible Doctrine (Chicago: Moody, 1972), 38.

Are We Inspired Yet?

The following is a paper I, Bryan D. Stallings, personally wrote. I am sharing it with you that it might further aid in your studies. To copy/paste this paper and submit as your own is PROHIBITED! 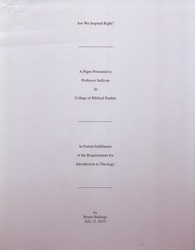 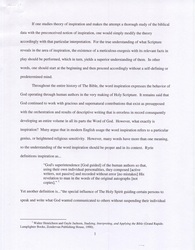 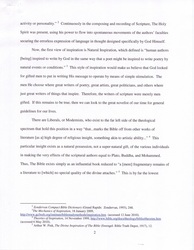 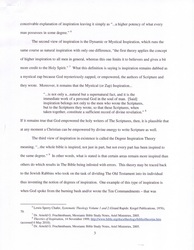 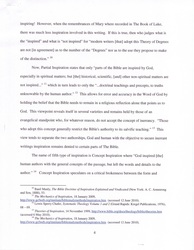 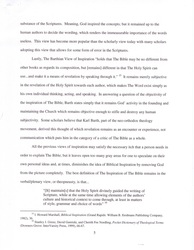 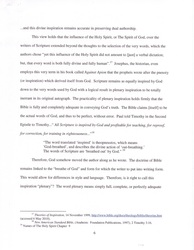 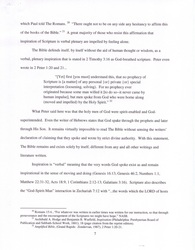 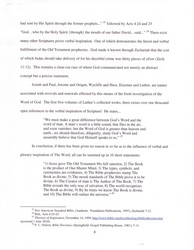 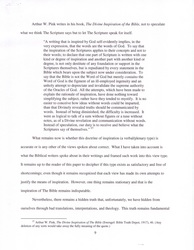 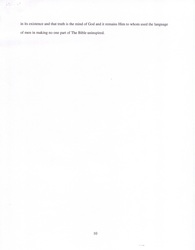 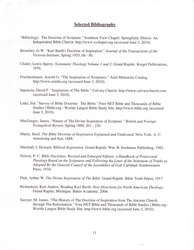 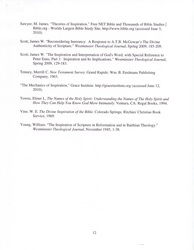